The Marigold as a symbol

In 1945, in Huissen, the Netherlands, a group of former refugees waited for the arrival of the Queen. The Queen planned to visit this heavily damaged town and give consolation to its citizens. Two girls, who were part of the group, had waited for hours while holding Marigolds. Because of an overcrowded program of the day, the Queen’s visit to Huissen was canceled. What was the effect of this setback in the group waiting? Disappointment? Bitterness? None of this: they felt comfort from the attention the Queen had wanted to bring with this visit. They felt 'elevated'. It gave strength and recognition to the great misery they had endured.

Seventy years after the Second World War, the University of Wageningen presented the Marigold as a wartime symbol for citizens. The Marigold - Calendula in Latin - is known for its infection-defense forming effect.

A symbol for citizens

Oppression, war, dictatorship, Nazism and similar inhuman systems at the present time are comparable to combating a life-threatening infection.
Thus the symbolism of the Calendula, the Marigold, was confirmed.
Meanwhile, the Marigold has become a symbol at several war memorials
such as in Arras, Berlin, Nijmegen, Arnhem and Dresden. 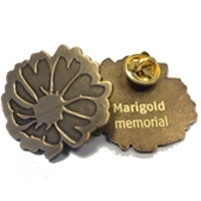